Productive cooperation of Pumori-Sport Company, sport equipment manufacturer, and the arm-wrestling sport club from the Ural Federal University has been lasting for ten years.
“Pumori-Sport developed and continues to develop training machines and other equipment for arm wrestling,” said Shamil Altiapov, founder of the company and Deputy Director of Pumori Corporation. “About twenty trainer designations have been designed. Our equipment is used in championships of Russia and Europe.”

Exercise machines of various designs make it possible to drill all kinds of movements and their parts with loads from different sides and at different heights. Pumori-Sport is the only Russian producer and supplier of a trainer complex for special arm-wrestling gyms. Such equipment is widely used also in the Ural Federal University arm-wrestling club coached by Valerii Filin for fifteen years.

Valerii has been a coach all his life; at first he trained cross-country skiers (including the USSR national team), then switched to arm wrestling:“Once they told me to accompany the university team to a competition among the universities of the oblast. The team took just about the last place, and I felt a shame: how come, are our guys really the worst?” Valerii organized a sport group and conducted training using appropriate methods, and after three years his trainees took sixth place in the junior championship of Russia. At present, 30 boys and 20 girls train in the arm-wrestling club; every year, there is a university championship as well as a separate first-year competition. The club has produced 12 Masters of Sport and 15 Candidates for Master of Sport. In 2012, the Ural University team won silver in the championship of Russian universities, and in 2013, it took first place.

“The club uses exclusively equipment produced by Pumori-Sport,” emphasized Valerii. “We design trainers and attachments together. Together with wrestlers, we discuss what elemental motions need additional drilling; then I meet with Shamil, tell him what we want; together, we devise the design, and the company makes a new trainer.” So, a considerable share of credit for the success of the university’s athletes must go to Pumori-Sport.

Unfortunately, centralized purchasing of this useful equipment does not take place. Tenders are held without involving specialists; in consequence, cheap items are bought, which are often of low quality, and even unsafe.

Finance is an acute issue. No funds are allocated for the development of this healthy sport, to the point that a European champion has to travel to the championship and back at his own expense. “Young people strain toward sports, but absent conditions, many grab the bottle and the cigarette instead. Don’t we want to bring up a healthy generation in our country?” questioned Mr. Altiapov with bafflement.

But nevertheless, Pumori-Sport and the arm-wrestling club of Ural University are committed to continuing their cooperation with a focus not just on raising new champions, but, most importantly, bringing up young people who will be both physically and ethically strong. To achieve that, production of new training machines is launched. 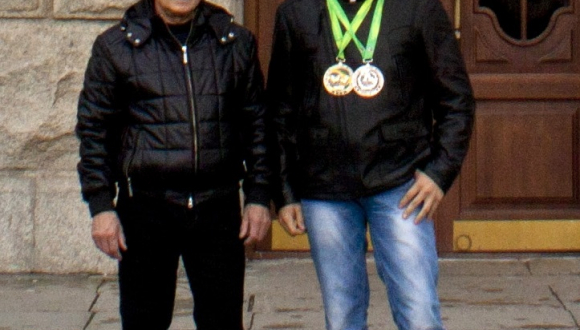